what i ate in london

I love quick lil’ roadies as much as I enjoy flying across the world! I got to take a trip to London, Ontario recently to shoot this Mukbang with Bear from Heavy Rescue: 401! We noshed on a bunch of vegan fast food options and chatted about all kinds of things from the comfort of the front seat of his truck. I got to try some of the best vegan food in London that was available! As always, here’s the ones that my tastebuds approved of the most!

First stop: coffeeeeeeee of course! This was a really quaint cafe that had a lot of cute decor. I had the featured toast which was piled with vegan cream cheese, blueberry ginger compote, lemon zest and pumpkin seeds on toasted sourdough. This was a scrumptious combo of toppings, and I loved it! They use the Nuts for Cheese brand of vegan cream cheese in case you wanna keep an eye out for it. Oh, and the coffee they serve is Pilot!


verdict: this place served everything you’d want from a coffee shop: great java, tasty vegan eats, and a lovely atmosphere!

This was the main hub where I got our mukbang food! Oh boy did we ever go to town on this vegan food in London… we had breakfast sandwiches, a big mac style burger, mac & cheese, chicken nuggets, and MORE!

verdict: you’ll have to check out the video to see what Bear and I thought of Globally Local!

So, Plant Matter has other locations including their Bistro and Cafe. But I can safely say after this meal that the Kitchen location has the best menu. I indulged in the vegan caesar salad and margherita flatbread. Some vegan cheese is hit or miss, but the mozza on this one was totally a hit! The brand was called Green Goddess which I’ll be sure to keep an eye out for from now on. Yum!

verdict: Plant Matter matters a lot to me after this trip! They even serve Beyond Meat products here, so it’s basically heaven.

I’m always pumped to see things on a menu that I can eat other than french fries and garden salad. If you’re a fellow vegan, I’m sure you can relate! It’s almost overwhelming to have so many choices at places like The Root Cellar. I had another vegan caesar salad, buffalo tempeh wings, and sour dough garlic bread sticks with vegan garlic aioli. These three dishes all complimented each other real well and left me stuffed.

verdict: this was a super cool spot, yo!

I went to yet another coffee house one morning because hello, do you know me?! Ya girl’s a big fan of cafes. As a heads up, this is a small lil’ nook, but if you can find a spot or you’re on the go then you’re golden. I got a homemade cinnamon bagel with Nuts for Cheese brie on it, which was a dope pairing of flavors. I also treated myself to a mini vegan pumpkin scone. Both were super tasty!

verdict: this place makes up for its small size with its big flavors and charm.

Farm Boy is a popular grocery store that carries a lot of vegan options! I lurked around the hot bar but didn’t really find anything that looked particularly appetizing. I settled on some onion bhaji but they were pretty stale and not good. Maybe if you got them fresh and warm they’d be better? Regardless, Farm Boy is still a staple grocery store for us vegans and worth wandering into if you’re near one.

Doesn’t everyone wanna shove their face in a loaded philly cheesesteak pizza? I know I do, and I got to try it out before it went live to the public that Friday! It was fully loaded with toppings which is exactly how a pizza SHOULD be. I want it to be heavy and covered in yummy ingredients, ya feel? Along with the philly cheesesteak pizza, I tried a Hawaiin-style ‘za called the Magnum Pi.

The last stop on my London, Ontario vegan food extravaganza was this bakery/coffee house! Bet you’ve never heard of a five alive pistachio doughnut before, eh? Neither had I, but I was excited to try it! It was exactly like the drink I used to have as a kid – kinda citrusy, kinda sweet! I assume they use it in the icing, which is a neat idea.

verdict: definitely a unique flavor combo on the doughnut! They also have other vegan baked goods that change daily.

That’s a wrap on all the vegan food in London, Ontario that I ate! It’s yet another lovable Canadian city that I had a great time in. London has seriously upped its vegan game with things like dope tasty toasts, unreal vegan cheeses, and loaded pizzas! 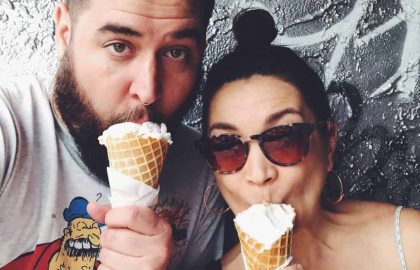 what i ate in bali 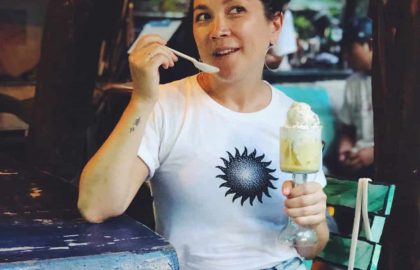 In June we donated $2053.00 CDN (100% of the ad revenue generated by your page visits) to Across Boundaries in Canada. They provide equitable, inclusive and holistic mental health and addiction services for racialized communities within anti-racism, anti-Black racism and anti-oppression frameworks.
LEARN MORE & SUPPORT