These roasted poblano and jack fruit tacos are the perfect item for your Cinco de Mayo celebration this week! You’ll likely have tacos on the brain anyway… but actually, when do you not?

It’s been a while since I created a new taco recipe. So when the rest of my testing for this occasion went downhill, I just remembered my motto… when in doubt, put it in a taco!

This recipe is fresh, light, and not too spicy. Well in my case it’s just spicy enough and I’m someone who can’t handle too much spice! The adobo cream sauce is uhhhhhmazing too. I have a couple notes on those chipotle peppers down below though!

Before getting into the recipe, I wanted to break down the mystery behind canned jackfruit. Not all cans are created equal but you can find what you need pretty easily. I’ve started seeing it at just about every grocery store recently, and now thanks to me, you know what to look for!

I’ve heard from restauranteur friends that getting it in Chinatown or T&T supermarket is the best, most inexpensive location. I live in Toronto and have seen it at No Frills, Fiesta Farms, and some random markets in Parkdale and Roncesvalles – sorry, the names escape me. It will obviously be easier to find if you live in a bigger city I’m sure, but when in doubt definitely check Asian grocers and markets!

Jackfruit is a tree that grows primarily in South and Southeast Asia and it grows multiple, enormous, strange looking fruits… that we can eat! I wouldn’t really advise scouring your city for an actual whole jackfruit. I’ve seen them in Chinatown where I live, but ain’t nobody got time to hack through and prepare it from scratch. This isn’t something I’ve actually done myself. I’m just intimidated and I don’t like jackfruit that much that I want a whole lot of it lying around. So canned jackfruit is very convenient!

The ingredients will be something like: jackfruit, water, salt, and an acid (citric acid, lime juice, or vinegar). Here are the brands I’ve come across and a few notes on the variations.

1. Chaokoh (20 oz can) young green jackfruit / from Thailand – this is my favorite brand to use as it’s the most mild and isn’t too salty or briney tasting. It does need to be trimmed, as I find the bits of the core are still in tact and don’t break up nicely. Once it’s trimmed, it’s essentially the same amount as in the 14 oz can. I find you can use this one and the next brand interchangeably, at least in recipes I’ve created. I drain and rinse this from the can under cool water in a fine mesh sieve and gently pat the chunks of jackfruit dry with paper towel, then trim and break up into shreds by hand before cooking.

2. Native Forest (14 oz can) organic young jackfruit / from Sri Lanka – I was using this brand until I found the above brand. I don’t love that it’s so pink. It just looks kind of weird. But once you cook it in sauce and prepare it properly, it’s just as good if it’s all you can find. I’ve noticed it’s the most common brand in grocery stores. However, this brand tends to be very briney and wet even when drained.

To prepare it, I drain it from the brine and rinse it under cool water in a fine mesh sieve. Then I squeeze out as much moisture as I can through the sieve and pat it dry with paper towels. This jackfruit is much softer and tender right out of the can compared to the first brand. This means that it will break up easily as you are straining it of moisture. I spread it out onto fresh paper towel and let the rest of the excess moisture dry up a bit more before I sauté it for a recipe. Now the flavour of the brine has been mostly neutralized and it can take on whatever sauce and spices you’re using in the recipe.

3. Cha’s Organics (14 oz can) young jackfruit in brine / from Montreal – I just found this on sale at Fiesta Farms in Toronto, so I wanted to compare it with the others. Do not buy this one. First off, it seems very tough, woody, and raw right out of the can. I did all the same preparation methods as the others and still found that it didn’t shred as nicely or get as tender. Unfortunately I had to waste this as it was that tough and it had quite a lot of the seed casings. The seeds pods are edible and you may notice a few of those in the other brands. They just break up and mesh with the rest of the fruit. But this one had a lot of tough outer skins of the seeds still in tact or something and they were not easy to chew. So I have no idea where they’re getting their jackfruit from?

NOTE / UPDATE: you might see Cha’s comment below on this post. They’ve mentioned that this jackfruit is as close as you can get to raw, fresh jackfruit in a can. According to the company founder, this product needs some additional prep work (however, it doesn’t say this on the can or online!) They said it should be boiled for 20 to 30 minutes before using in recipes, preferably in some veggie soup stock or spiced salt water.

I have one more can left so I promise to give it another try, however, if it’s going to take the extra time it still might not be my first choice. I’ll cook it as they suggested and then try out the same application for this taco recipe to compare properly!

Anyway, for those who live in the USA and are near a Trader Joe’s, you’ll find a comparable in-house brand that will look much like the Chaokoh brand that I use. So get to know jackfruit! I think you’ll love it and it all really comes down to the preparation. You’ll find a couple more spectacular jackfruit recipes in my cookbook, too! The texture or feel is reminiscent of fish or chicken in this one, but by now you’ve probably seen the most common jackfruit recipe – a version of a pulled pork, smothered in BBQ sauce!

If you can find pre-sauced packaged jackfruit, even better! When I’ve visited friends in the U.S., I’ve come across a few brands. I really like this one by The Jackfruit Company. Of course, it won’t taste the same as the seasonings I’ve cooked the jackfruit in for this recipe, but for this particular recipe I would use BBQ or Tex-Mex.

Another common packaged jackfruit is by Upton’s Naturals. But personally I found the jackfruit texture to be too fiborous and woody even after being warmed up thoroughly, and their product is supposed to be ready to heat quickly and serve. But their other vegan meat products are quite good.

In regards to the uhhhhhmazing adobo cream sauce, turns out that not all cans of chipotle peppers in adobo sauce are created equal. Through the testing you guys have done since this recipe was posted, it seems like some brands are SPICIER than others. So the amount I’ve listed below is a suggestion, but if you can’t handle much heat try adding some of the juice without whole peppers at first and then just keep adding more until you get a spice to your liking. I’ve heard some people think the adobo cream sauce is inedible with the amount I added. But again, I think I just had a brand that wasn’t AS spicy.

Okay, onto my recipe… it’s SO good!

If you have yet to try jackfruit, this unique flavor combo with roasted poblano peppers a creamy hot adobo chili cream sauce will convince you of its magic! 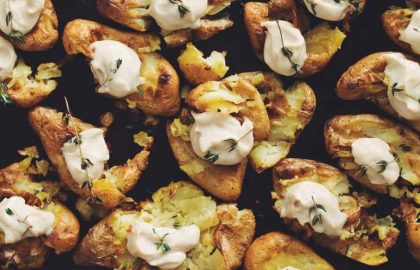 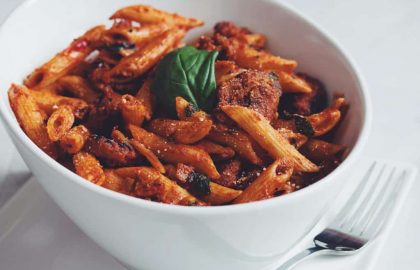 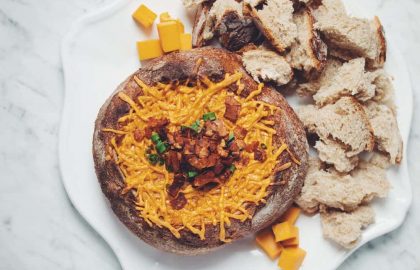 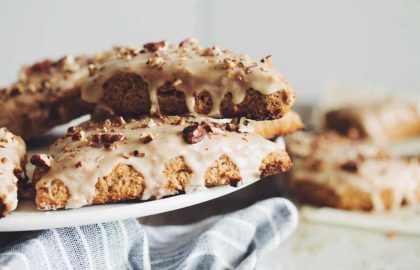 This best selling cookbook from hot for food contains over 100 recipes for the best vegan comfort food!
BUY NOW